The Pattern in Nature’s Networks


From food webs to Facebook—even inside our own brains—the networks that bind us exhibit an all too familiar hub-and-spoke pattern. It appears over and over again. Connected clusters link people or species, cities, or neurons. This pattern is nature’s way of allowing resources and activity to course through the network, maximizing efficiency.

Exoplanets: The Next Frontier | An interview with Sara Seager


Sara Seager sits down with Sky & Telescope’s Editor in Chief Robert Naeye to talk about the future of exoplanet studies and the exotic worlds we might find.


This is a 3D simulation of the initial stage of a supernova, the core collapse that gives birth to the neutron star. It was released on Tuesday by a team of researchers at the Max Planck Institute for Astrophysics. In their simulation, the shock undergoes a spectacular sloshing behavior called a “standing accretion shock instability.”

We hope you enjoy our…dramatic rendition.


The most recent observations indicate Comet ISON is on track to hopefully (but not definitely) reach naked-eye visibility in December 2013’s pre-dawn sky. S&T Senior Editor Alan MacRobert explains just why it’s so tricky to predict how bright ISON will be, and previews what you’ll need to know to spot it as it approaches the Sun for its close encounter.

The Night the Scientific Revolution Began


Science Historian Owen Gingerich describes how he recently discovered hand-written notes by Galileo pinpointing the moment in which he realized the Earth was not the center of the Universe.

Libya protest on Copley Square from Mark Zastrow on Vimeo.

On March 19, 2011, as Libyan government forces surrounded the final rebel stronghold of Benghazi, a group of Libyan–Americans gathered in Boston’s Copley Square to protest the regime and to call for UN action in support of the rebels.

The Worst Observing Run Ever

The story of the 18th century astronomer Guillaume Le Gentil and his horrendously ill-fated 11-year quest across south Asia to observe a transit of Venus.

A version of a public lecture given at Boston University during the transit of Venus on June 6, 2012 (and yes, a tongue-in-cheek stylistic homage to This American Life). 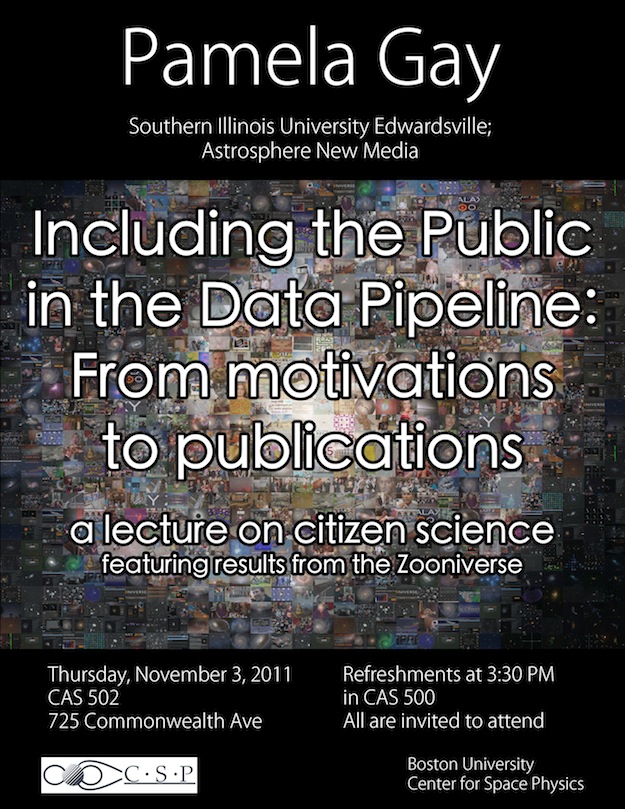 A poster I designed for a talk I organized by Pamela Gay. Created using MacOSaiX and Photoshop.