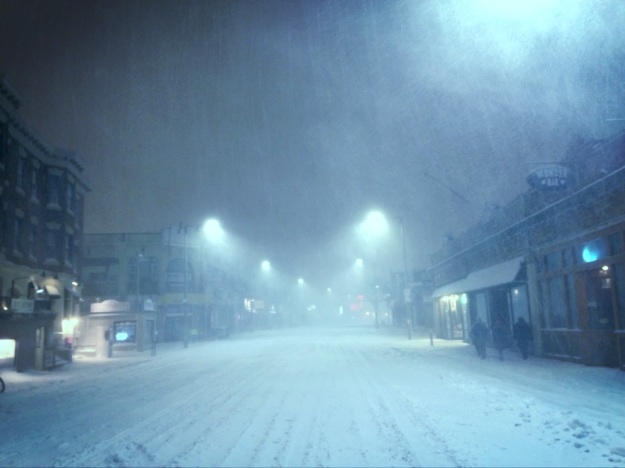 As I currently write this, about 8 inches of snow have accumulated on my back porch in Boston, thanks to the winter storm system known commonly as Nemo. That this storm even has a name is a new phenomenon. It comes not from the National Weather Service, which is the authority that names hurricanes. Rather, “Nemo” (and #Nemo) comes to us courtesy of The Weather Channel, which decided this year to assign names to winter storms that it deemed “significant” in order to “increase awareness and enhance communication of disruptive, impactful winter storms.”

Another reason might be to enhance their bottom line. Some people aren’t too happy about this, and one of them is Max Read at Gawker. He argues that the naming scheme, which is not authorized by the National Weather Service, is a “money grab” by TWC designed to heighten the sense of importance and hysteria that fuels high ratings. He also argues that winter weather systems are not as clearly-defined as their cyclonic summer counterparts, and that accordingly, their effects are too geographically inconsistent to be assigned one, all-encompassing name. In contrast,

“[C]yclones, which are the kind of storm that gives rise to hurricanes, are meteorologically-specific events that are easily identifiable; last for a long time; and arise simultaneously with other, similar storms, necessitating individual identification.”

He seems to have an airtight case on the first point, but I’m not convinced about the latter. Large-scale winter weather storms like Nemo are also the result of cyclones—mid-latitude cyclones. They’re slow-moving, large-scale systems resulting from air rushing in to fill large low pressure centers, similar to their tropical counterparts. They can cross the Atlantic and move to Europe, where they do get a name—the weather community there has been doing it for decades. They also are not always officially authorized by a government agency (while the Norwegian weather service does, the names used throughout most of Europe are assigned by the meteorology department at the Free University of Berlin), but are commonly used.

As an astrophysicist, to me, air is air, and when it swirls, it swirls. The same physical effects are at work in a tropical fall cyclone as in a mid-latitude winter cyclone: the Coriolis force, and pressure and temperature gradients. Although they are distinguishable by the region and the season in which they tend to form, I don’t see that as a reason to not name one while naming the other. But, dammit, Jim, I’m an astronomer, not a meteorologist, so perhaps my more earthly-minded friends can chime in on this point.

Regardless, whether The Weather Channel makes money off of naming them seems rather beside the point. Clearly, many weather agencies around the world do feel it is a good idea, on awareness and meteorological grounds. And, I admit that as a Twitter user, having a hashtag is convenient (and fewer characters than the #snowpocalypse that hit the eastern seaboard a few years back).

It does give me pause for a commercial news agency, rather than a scientific one (as in Europe), to take it upon themselves to delegate names. A legitimate concern is that the process will require genuine restraint that could conflict with TWC’s interests. For example, the 1991 “Perfect Storm” eventually evolved into a hurricane after it blew out to sea and was no longer a threat, but remained unnamed by the National Weather Service precisely in order to avoid unwanted confusion. I like the idea of naming winter storms. It would be nice if the National Weather Service would save us all the trouble and simply issue them themselves.